Ampere – Unit of current (flow) (l)=E/R
AC – Alternating current.
Ampacity – The current-carrying capacity of the conductor under stated themal conditions.*
Conductor – A conductor is the current-carrying, non-heat producing component of a heating element.*
Conduction – The transfer of energy within or between two bodies in physical contact.
Convection – The movement of a mass with its associated energy (liquid or gas) from one location to another.
DC – Direct Current.
Dielectric Breakdown –The ability of the electrical insulation to withstand an applied voltage
Element – An element is a resistor encased in an acceptable insulating material covered with a protective sheath.
Ground – A conducting connection between an electrical circuit or equipment and the earth or some conducting body that serves in place of the earth.*
Hazardous Location – Locations are classified depending on the properties of the flammable vapors, or gases, or combustible dusts, or fibers which may be present and the likelihood that a flammable or combustible concentration or quantity is present.*
Heat – Heat is energy in transition, or transfer, from one body to another by virtue of temperature difference existing between the bodies.
Heater – A heater is a completed, usuable assembly containing one or more elements.
Heat of Fusion – Heat necessary to change solid to liquid.
Heat of Vaporization – Heat necessary to change solid to gas.
Hertz – Unit of frequency of charge reversal for alternating current.
Hi-Pot – A high voltage quality assurance test performed on electrical components and systems.
Impedance Heat – A system in which heat is generated in a pipeline or vessel wall by causing current to flow through the pipeline or vessel wall by direct connection to an AC voltage source from a dual-winding transformer.
Insulation – Electrical insulation is the dielectric material surrounding the resistor and/or conductor in order to electrically isolate the current-carrying components from ground or other components.* Thermal insulation is any material that retards the transfer of heat to the environment or other components.
Insulation Resistance – Insulation resistance is the ability of the insulation to resist the percentage of current.*
Leakage – The undesirable passage of current flow through or over the surface of an Insulator.
Leakage Current – The total electrical current flow frow the resistor through or around the insulation to a point external to the resistor when
the element is energized.*
OHM – The electrical unit of resistance (R) R=E/I
Parallel Circuit – A circuit in which the identical voltage is presented to all components and the  components according to the resistance or the impedance of components.
Radiation – The transfer of energy from one body to another through space by electromagnetic wave phenomena.
Rating – Rating is the performance characteristic of an element or heater and is normally expressed in power output (watts) for a specific input voltage.
Resistor – A resistor is the heat-producing component of an element.*
Series Circuit – A circuit in which the components are arranged end to end to form a single path for current.
Single Phase – A system energized from a single alternating voltage.
Specific Heat – The heat energy in Btu’s required to change the temperature of one pound of a substance by 1°F.
Specific Gravity (Gas) – The ratio of the density of a gas to the density of water at 60°F and 14.7 PSIA.
Specific Gravity (Liquid) – The ratio of the density of a liquid to the density of water at 60°F and 14.7 PSIA.
Thermal Resistance – The property that opposes the flow of heat (energy) through the material.
Terminal –A terminal is the device or point at which external power is connected.*
Three Phase – A system energized from three substantially equal voltages that differ in phase by one-third cycle or 120°.
Volt – Unit of electrical pressure. 1 volt is the amount of pressure that cause one ampere of current under a pressure of one volt. (W) W=EI
Watt – Unit of electrical power. One watt is equivalent to the power represented by one ampere of current under a pressure of one volt.
Watt Density – Watt density is the output of the element or the resistor in watts per square inch of surface. On heating cable elements, watt density is expressed in watts per foot of cable.*
Wattage rating Tolerance – Wattage output tolerance is the acceptable manufacturer’s wattage variation allowed from rated wattage at rated voltage.*
*NEMA Standard 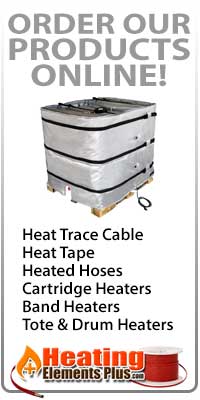